Excess Water Can Lead To Intoxication 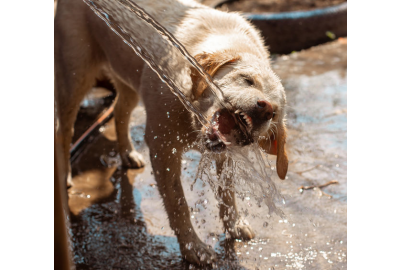 Excess Water Can Lead To Intoxication

It's summer and it's hot. Like children who love to splash and play in the pool, some dogs also enjoy playing with water. Sure water is an important part of your dog's nutritional requirement because it aids in the movement of nutrients to and from the body's cells and it aids in the absorption of nutrients. On a daily basis your dog should consume about ½ to 1 ounce of water per pound of body weight. Besides the health benefits of water, water is a source of play for some dogs.

Our friend John has a labrador retriever, Sam, who loves playing with water. From splashing and digging in the water in his doggie pool to chasing water from a garden hose Sam obviously consumes some water along the way. However fun this may be for your dog too much water intake in a short period of time can be dangerous and cause water intoxication. Typically this occurs with dogs that love to play in water such as constantly retrieving objects thrown in water. However, it also occurs in dogs that ingest excessive water from a hose or a sprinkler (“bite” the hose) and dogs that over-hydrate during or after hard play or exercise. According to John, the bite the hose scenario describes Sam to a tee. On summer days John would point the hose in Sam's direction and Sam would chase after the water from the hose. Or Sam would dash towards the sprinkler when it turned on and bite the water as it sprayed out of the sprinkler. As Sam keeps biting the water, he actually intakes a lot of it. It was not until we informed John about water intoxication occurring in dogs did he realize that his dog's biting the water behavior could actually be harmful.

Water intoxication can result in hyponatremia which is a relatively rare, but potentially fatal condition in dogs. With hyponatremia, the excess water can't be processed by the body. The excess water also dilutes bodily fluids and this creates a shift in the electrolyte balance as sodium levels in fluids outside of cells are depleted. When this occurs the body attempts to balance the sodium levels inside the cells by filing these cells with water which causes the cells to swell. For example, brain cells can swell, but the brain which is encased in the skull cannot accommodate the swelling cells.

Symptoms of water intoxication include lethargy, loss of coordination, excessive salivation, glazed eyes, dilated pupils, pale gums, bloating, nausea and vomiting water. More serious symptoms include difficulty breathing, loss of consciousness, seizures, coma and death. Water intoxication can occur in any size dog, but is often seen in smaller dogs. This is so because it takes less time for the excess water to accumulate in their small bodies.

It is important that your dog always has access to clean, fresh water everyday. Water is important because it keeps your dog hydrated and healthy. However, one should keep one's dog from engaging in activities that result in the constant intake of excessive water. John has since kept Sam from biting the water from the hose and sprinklers and has found other safe outdoor activities for him.